Why Russia stagnated as China boomed

Forty years ago, Russia and China had a similarly small share of world trade. Fast forward to today, and China’s economy is about ten times as large as Russia’s. What explains this enormously different outcome? The answer is competitiveness and exchange rates.

When the Soviet Union broke up in the 1980s, its GDP per head was about five and a half times as high as China’s. The USSR had hundreds of thousands of well-educated and trained engineers and technology capable of producing world-class fighter aircraft. China, by contrast, had average living standards that were less than one-tenth of those in Western Europe. The country was still recovering from its catastrophic Great Leap Forward and the Cultural Revolution. Its industrial base was relatively small and poorly equipped. Neither the USSR nor China had much to sell to the rest of the world – mostly commodities such as oil and timber in the USSR’s case and agricultural products in China’s. In 1980, the USSR’s share of world trade was barely 2%, while China’s was even lower – at no more than about 1%.

Forty years later, China’s economy is about 10 times as large as Russia’s. GDP per head, on a PPP basis, is about twice as high. Over this forty-year period, Russia’s living standards have risen by about 40% compared to China’s, which have increased by a factor of about 20. Russia is relatively unstable politically, with its economy heavily tainted with corruption and inefficiency, while China is still in the firm grip of the Chinese Communist Party, presiding over what is a highly successful, largely capitalist system. Russia’s share of world trade is still about 2%, while China’s is over six times higher, at 13.2% in 2017.

What explains this enormously different outcome? The answer is competitiveness and exchange rates.

When the Communist regime in Russia collapsed, under Mikhail Gorbachev and the Boris Yeltsin, policy veered towards harsh privatisation. Inflation was rampant and Russia had a lost decade in the 1990s as GDP declined by about 40%. Russia still had nothing much to sell to the rest of the world and continued to export mostly oil, gas, and timber – the same staple sales as had kept the notoriously inefficiently run export bureaucracy of the Communist era going.

The policy that China adopted was completely different. From about 1980 onwards, China allowed increasingly full rein to a market economy, fuelled by exports which were made extraordinarily attractive in price by a massive devaluation. Between 1980 and the mid-1990s, the exchange rate for the Chinese yuan, or renminbi, against the US dollar fell from 1.95 to 8.32. Inflation in China was on average about 50% higher than it was in the USA, but this came nowhere near undermining the huge increase in competitiveness from which the Chinese economy benefitted. The graph below shows what happened to competitiveness between the USA and China on the most reliable measure, which is inflation and productivity adjusted relative unit labour costs. 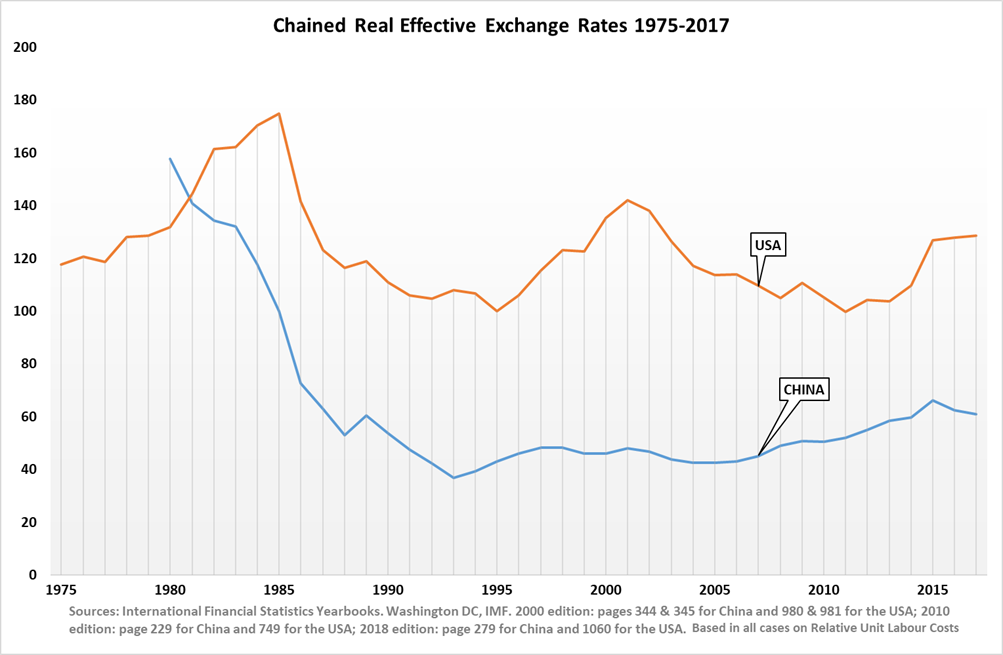 What China did was to move rapidly and charge out all its labour and overhead costs to the rest of the world at a super-competitive low rate. Raw materials, machinery and components were still bought in world prices, but all the costs of labour, management, overheads, interest, and taxation were charged out at about 25% of their previous rates in world currency terms, producing super-competitive export pricing.

The huge export opportunities thus created drove up China’s share of world trade at the same time as export-led opportunities provided ample incentives for massive rates of investment. By the late 2010s, 27% of the Chinese GDP was coming from manufacturing, compared to barely 10% of much of the West, where productivity increases are much easier to achieve than they are in services. Investment as a percentage of GDP had climbed to 44%. This is the basis upon which China achieved its phenomenal growth rate, averaging around 10% per annum, doubling GDP per head every seven years.

How did China manage to get its exchange rate down so effectively and then to keep it there, in the process mopping up a significant percentage of the world increase in manufacturing output? It was no accident. The coordination involved can only have been the result of state direction by people who understood how important competitiveness is. Legislation was passed in 1980, giving export revenues special treatment, which made attaining them highly attractive, thus biasing incentives towards export performance. Enormous wealth funds – much the largest in the world in total and recently valued at $2,244bn – were used to buy foreign assets, thus depressing the value of the Chinese currency.

Foreign currency revenues – the results of the huge balance of payments surpluses achieved by China, peaking at almost $400bn a year in the late 2000s – might have pushed up the value of the currency. They were neutralised by the People’s Bank of China using them to buy foreign securities, particularly US Treasury bonds, all designed to keep the Chinese currency exceptionally competitive. While nearly all the West concentrated policy attention on keeping inflation down to 2%, China realised that high growth rates were much more important and that they could be achieved without paying a high price in terms of inflation for years on end.

The West did not, therefore, respond to what was happening in China with determined efforts to retain competitiveness. On the contrary, there remained a widely held belief in the West that their economies were better off with a strong currency rather than a weak or more competitive one. This suited a number of key interest groups, including consumers who liked low-priced goods in the stores and cheap holidays abroad, pensioners who liked the relatively high real interest rates which fighting inflation entailed and financial interests who generally favour the additional international leverage which strong exchange rates – at least in the short term - bring in train.

But the results have been disastrous for the West and here, in a little more detail, is why. The additional competitiveness which the Chinese succeeded in securing made exporting from China extremely attractive both to Chinese producers and to buyers from all over the world. The result was that the Chinese share of world trade rose dramatically as investment, particularly of the most effective kind, raised output per hour as it poured into Chinese manufacturing. This is why productivity is so much easier to achieve in manufacturing than it is in services. No wonder this led to China’s GDP rising so much more rapidly than in Western economies.

Crucially, the types of investment which are stimulated by export-led growth are those which have exceptionally high total – or social – rates of return. They cluster round mechanisation, the application of technology and the use of power. Most types of investment – in road, rail, schools, hospitals, public buildings and housing in the public sector, and office blocks, shopping malls, projects such as new restaurants, IT installations and again housing in the private sector – all produce relatively low rates of return - on average typically around 5% per annum. They may be very important for other reasons, and be highly desirable socially, but they do not do much to raise economic growth. Investments in mechanisation, technology and power, on the contrary, often achieve overall rates of return of 50% or more per annum. This is what drives economic growth. Excluding the contribution made by physical investment, especially of the most high-powered kind, productivity increases in the remainder of the economy seldom get about 0.5% or 1.0% per annum, as has recently been the experience of many Western economies.

The reason why the exchange rate is so crucial to this process is that this is what determines the rate at which all domestically incurred costs are charged out to the rest of the world. On average, about 30% of manufacturing costs are incurred on machinery, raw materials, and components, for which there are world prices which – in world rice terms – stay the same whatever happens to the exchange rate. All the remaining 70% of costs – on wages and salaries, all overhead costs, interest charges and taxation – are incurred in the domestic currency and the rate at which they are recovered from the rest of the world depends directly on the exchange rate. The lower this is, the more competitive export prices and the less import penetration there will be.

At the moment, there is certainly an increasing realisation in the West that China presents a radical and fundamental challenge. This perception does not appear, however, to be backed up by a realisation as to why this is happening so quickly. It is because competitiveness is shifting economic power in China’s direction so rapidly and the cumulative effects of much higher growth rates over a relatively short period of time are so massive. China is continuing to grow in power in relation to the West because its economy is more competitive, its share of world trade is continuing to rise, its level of investment, especially in the most productive types of projects, is much higher than it is in most of the West and a much higher proportion of its GDP comes from manufacturing than is the case in Western countries.

As long as this situation is allowed to be maintained, China will continue to have a more and more dominant position industrially in the world generally and in innovation in particular. The appeal of autocracy will rise and that of democracy will decline. Freedom, as we know it, in the West will be eroded, and the predominance of Western ideas on social democracy, pluralism, and freedom of thought will be undermined.

The stakes could hardly be higher. Unless the West revises its views on competitiveness and the importance of economic growth compared to keeping inflation down – which current policies in the West may not be successful in containing anyway – the more the West is at risk. Russia may continue to be the thorn in the West’s side, but it is not an existential threat. Economic growth of barely 1% in the West while China continues to grow at 7% or 8% per annum certainly is.

John Mills is founder and Chairman of JML, the consumer goods distribution company, which exports to more than 70 countries around the world. He is also an economist and author, noted for his writing on Brexit, the Labour Party and exchange rate policy.